I recently posted my review of THE WINDSOR KNOT by SJ Bennett on my library's Facebook page: 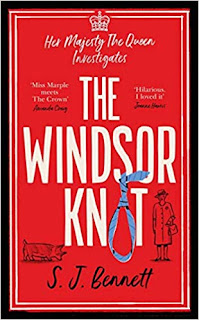 THE WINDSOR KNOT is the first in a new series that features the Queen as a detective. It’s 2016 and the Queen is soon to celebrate her ninetieth birthday. Before that she holds a ‘dine and sleep’ (a real and regular event apparently) at Windsor Castle, her favourite residence. Included in the mix of the great and the good is a young and handsome Russian musician. Disaster strikes the next morning when his naked body is found in a wardrobe, “strung up like a Tory MP”; the verdict being accidental death. The Queen is not so sure and suspects foul play. Though she cannot be seen to investigate she assigns the legwork to her very capable assistant private secretary Rozie and uses her own position to gently manipulate the Government investigators in the right direction.

For all its outward appearance of being a ‘cosy’ read there is a bit more grit to it than that. As well as the manner of death, it also includes spying and drug-use as potential motives, but as this exchange between the Queen and Prince Philip shows, she’s unshockable:

“They forget. I’ve lived through a world war, that Ferguson girl and you in the Navy”

“And yet they think you’ll need smelling salts if they so much as hint at anything fruity. All they see is a little old lady in a hat.”

This is an enjoyable “country house” mystery with any wrongdoers having had to have been on the premises due to the tight security arrangements. The plot is quite complicated and revolves around a significant clue, one that the Queen can assist with explaining. If you watch ‘The Crown’ or are interested in the Royal Family, then that will give an added dimension.