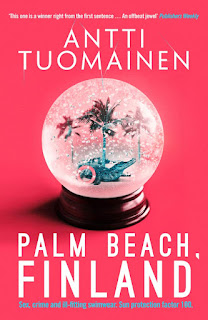 It was a misunderstanding, a delicate imbalance between push and shove. And thus the neck broke like a plank snapping in two.

Palm Beach Finland, Summer:
39 year-old lifeguard “Chico” Korhonen waits near the resort’s huge sign as agreed. He thinks the place looks great these days. Its greyness transformed by new owner Jorma Leivo; the place glows. Huts gleam with fresh paint, pink, blue, green; a shop, pizzeria, sunshades dotting the beach, a windsurfing setup. OK, the biting breeze and cold water means the deckchairs are empty but Chico enjoys walking past the newly planted row of plastic palm trees every day. Life is bright and new. The incident with the fat woman, her handbag and the lunch vouchers was tricky but the boss has told Chico that he is looking for someone with a bit of street savvy. He might be able to put “a little extra” his way. So now Chico waits for his best friend Robin (not the sharpest knife in the drawer) and their meeting with Leivo to discuss that “little extra”.

Leivo is a big man with a head-turning fashion sense and fair hair that curls upwards around his bald crown. He is sweating profusely as he explains, in his gruff teddy-bear voice, that the “little extra” he has in mind is to put some pressure on the owner of a neighbouring plot of land. Nothing serious – a smashed window, a stolen bicycle, a bit of urinating through the letterbox – but he needs that land signed over within the month, understand?
Chico and Robin stake out the neighbour’s house that evening. A ground floor light comes on. They throw stones which shatter the window. But then there is all this yelling. The pair erupt into the kitchen. There is blood everywhere, including over the woman’s face. She starts attacking them with an electric whisk, long hair flying, and it all goes west from there. They floor her. Chico grabs her feet, Robin wraps his arm around her neck and they are carrying her towards the door when Chico slips, Robin carries on moving and, crack, she goes limp. They lay her down. Definitely dead. But also … she's a he. How did that happen?

National Bureau of Investigation, Vantaa, two weeks later:
Jan Nyman’s boss briefs him on the new case, a body in a small town; local investigation, no results; regional investigation, no results. But it must be a professional job. The victim was beaten and his neck broken in a way that indicates an expert knowledge of anatomy. The woman who owns the house has an alibi but maybe she was involved, a contract hit. Jan is to make the undercover investigation; he is “Jan Kaunisto”, a maths teacher on holiday. But the boss is convinced that the woman is pulling the strings.

The woman in question, Olivia Koski, is discussing drainage issues with the local plumber. She wants to live in the house left to her by her father but it needs a lot of work, total renovation. She whittles down the plumber’s estimate. They agree an amount. But Olivia knows that her bank account contains zilch. Just as the whole town knows that this is the house where a murder took place. She’s got herself a job and her shift is starts soon. She changes into her uniform, looks at herself in the mirror, and feels just as naked as she did yesterday.

Helsinki:
Holma is dangling a man by his knees over a balcony when the news comes through on his phone that his brother is dead. He has had to release his grip on the man in order to answer his phone and hears the subsequent thump. It seems his brother died two weeks ago in some woman’s house in a small town somewhere. Holma knows his brother is – was – a disaster; they started their criminal life together. And whilst Holma has come far, his brother has not. Nevertheless, family is family. Anyone so much as touches his brother – Holma gets into his car...

Jan Nyman may be an undercover policeman but PALM BEACH FINLAND is no police procedural. Award-winning Finnish writer Antti Tuomainen takes a different approach with each novel: environmental speculative fiction; investigative thriller; psychological thriller. This latest, PALM BEACH FINLAND, brings us satire and criminal slapstick. It’s a dark farce in which a group of characters chase their dreams or rather those that money can buy. The resulting intersecting motives, misinterpretations and violent acts take place in and around an unlikely Baltic beach resort. But glimpses of Finland peek through this Americana setting: pine trees, wooden houses, a tide-less Baltic beach and the exquisite portrait of Miss Simola – an elderly, erotic Finnish earth spirit. (Well, I think so.)

Antti Tuomainen always steps into the new with each novel and PALM BEACH FINLAND, in this assured translation by David Hackston, takes a Finnish slice from the comic, crazy, greedy, crime world of the likes of Get Shorty or Fargo. Where will Tuomainen's imagination take us next?
I don’t know but before that – read this one.