Review: No Time to Cry by James Oswald 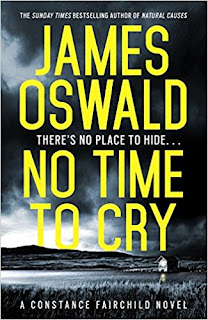 Detective Constable Constance Fairchild has a major problem; Lady Constance to give her correct title, or Con as she prefers. Her father is Lord of the Manor in a Northamptonshire village but she is now based with the Met Police in London.

Con has just discovered her boss and good friend Detective Inspector Peter Copperthwaite brutally murdered. He was on an undercover operation and Con was his liaison. Her colleagues believe that she compromised his cover. Detective Superintendent Bailey is scathing of Con's role and immediately suspends her.

Con is desperate to clear her name but gets sidetracked when her brother Ben's girlfriend Charlotte asks her to find her sister Izzy. Izzy has gone missing from her exclusive school (Con went there and was expelled on her last day) and her parents the DeVilliers seem unconcerned. Con is estranged from her parents but is close to her father's sister, her Aunt Felicity. She moves in with her aunt when life gets complicated in London as someone wants her dead! Can Con clear her name? Can she find Izzy and why has she disappeared?

This seems like a new series for the author who is best known for his Detective Inspector McLean series which has eight books (nine in February 2019). Fast paced but at times fairly implausible, Con is a likeable character and there is more to be revealed in her background, so I will look forward to reading more about her in the next instalment. Recommended.