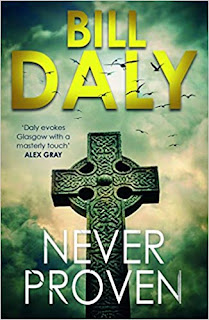 This is the fourth book in the Charlie Anderson series by this very talented writer from Glasgow and set in around the town he knows so well.

John Preston an IT consultant is found dead on the streets of Glasgow and DCI Charlie Anderson is very disturbed by the circumstances of the killing which indicate that the victim perhaps knew his assailant. On the same night a local man was attacked in a local pub and had his hand nailed to the floor and it looked like the assailants were connected to the killing but the DCI has a hard case attempting to prove the connection.

As this is the fourth book in the series the detectives in the story become more familiar to the regular reader and their back story provides the author with a rich seam of content to pass on.

As is usual in books of this kind there are many false trails before the ultimate reveal in the final paragraphs.

Bill Daly originally came from Renfrew (near Glasgow). Having spent forty years away from Scotland (living mainly in France) he returned to live in Glasgow in 2015. In 2016, he was awarded The Scottish Association of Writers’ Constable Trophy for his novel writing. His first DCI Charlie Anderson thriller BLACK MAIL, published in 2014 became a No 1 Kindle Bestseller in the “Scottish Crime” category.

I always look forward to reading Bill Daly's books as they effortlessly incorporate the seedy nastiness of the tougher parts of Glasgow. They are always very fast moving and evocative and the characters all have a rich credibility. I was, as usual, absolutely gripped until the final dramatic paragraph and look forward to reading more from this very exciting and gifted author.