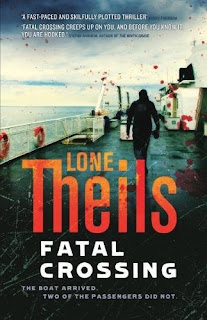 Nora focused on the pictures on the wall behind him. They were copies, blown up to triple size. That in itself wasn’t frightening. What made the hairs on Nora’s arms stand up was that pretty much under every picture, there was a name. And underneath the name, the laconic message: Missing.

A coastal town, southern England.
A middle-aged African school teacher calmly drinks tea as he recounts massacre, rapes and mutilations to Danish foreign correspondent Nora Sand. He explains his part in these horrific acts as: “clearing cockroaches out of the kitchen”. Nora hides her disgust and leaves Pete to take carefully anonymous photographs of the informant. They take the coastal road back to London, stopping at a tiny fishing village for a walk on the beach to drain the poisons of the Rwanda story. In the village Nora spots a leather suitcase in a junk shop window; definitely one for her collection. The shop is open and the deal is done. When she reaches her tiny London flat, Nora dumps the case and drops into bed, exhausted.

The Crayfish, Nora’s boss at the Danish weekly Globalt, has never got to grips with time differences. So when he rings at 6.30 next morning, Nora staggers out of bed and trips over the suitcase in the middle of the floor. It falls open, spilling out a group of Polaroid photos which she hunkers down to examine: teenage girls, all in similar poses, looking straight at the camera, 1980s to 1990s by the fashions. One photo in particular catches her eye: this time two girls stand in front of a wall below a sign in Danish – Car Deck 2.

Nora is working on the Rwanda story when she is interrupted by the entryphone. Her old friend Andreas, now with the Danish police, now in London on a course, is now on her doorstep for their forgotten lunch date. He studies the Polaroid of the two girls, and spots a bracelet of lettered beads. An L? E or I? Over lunch they agree that something bothers both of them about the photo and Nora remembers a TV documentary about two Danish girls who went missing from a passenger ferry in the 1980s. They had been heading to England for a short trip as part of a group of teenagers from a care home. They vanished during the crossing, a backpack on the sun deck the only trace. Neither were seen again and the adults in charge of the group went on trial for negligence.

During Nora’s flying visit to Denmark for a family birthday, The Crayfish surprises her with permission to follow up on the story. She wastes no time in printing out copies of the Polaroid and raiding press archive resources, including re-examining the TV documentary on the missing girls. Andreas’ uncle arranges a meeting with a police colleague who had been part of the original investigation. He in turn is shocked by the Polaroid and immediately takes possession of it for Forensics. In keeping with her research Nora immerses herself in a book about British serial killers on her return flight. A photo halts her, a victim of serial killer William Hickley. A young woman stands against the backdrop of a wall just as in the Polaroids Nora found in the suitcase. The British police found the preserved tongues of at least fifteen victims whom they believed Hickley, or Bill Hix as he liked to call himself, had tortured and killed. Hickley was tried, found guilty and imprisoned, but to this day refuses to reveal the whereabouts of the bodies of his victims...

Danish news correspondent Lone Theils was based in London for 16 years. Now back in Denmark, she has written a debut crime novel that achieves just what she set out to do – combine her love of British crime stories with Nordic Noir. It introduces Danish journalist Nora Sand; her complex family relationships; her passion for investigative journalism and kick-boxing (shared with the author) and her hectic life which in this novel criss-crosses the North Sea between England and Denmark tracking her obsession with the idea that her second-hand suitcase and the photos it contained belonged to a notorious serial killer. En route she encounters police investigators in both countries who are still haunted by disappearances as well as the whereabouts of Hickley’s victims’ bodies. The case leads Nora to Scotland Yard and a list of missing girls from across Europe compiled by profiler Jeff Spencer’s team and then through the gates of a notorious prison and into the presence of the rarely interviewed killer William Hickley.

Translated from the Danish by Charlotte Barslund (translator of Gazan’s THE DINOSAUR FEATHER, Enger’s BURNED and more), FATAL CROSSING's pace quickly takes hold as the plot gains complexity (alongside Nora’s private life) and explores both the troubled past of the children from the care home in Denmark and the sedate and seemingly soft life of English seaside towns. (I did wonder if this complexity allowed a red herring to swim past me – but perhaps that was due to my lack of sleep as I read on through the night). Although lacking some of the objectivity that I like in my favourite Nordic Noirs, this is an accomplished and exciting crime novel. With a second Nora Strand book published in Denmark I hope there will be more from Lone Theils to satisfy those readers who like to travel with their crime-reading as well as those readers who like to stay at home – be they Danish or British.