Review: Death of a Ghost by M C Beaton 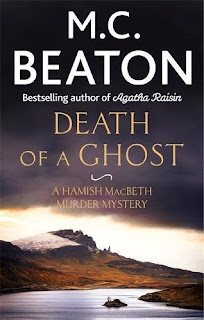 I'm a huge fan of M C Beaton's Hamish MacBeth series set in the Highlands of Scotland, which has been running for over thirty years now. Though time stands still in terms of the characters' ages they do move with the times in terms of modern accoutrements such as iPhones.

In this latest outing, DEATH OF A GHOST, Hamish and his latest police sidekick/colleague Charlie are summoned by an ex-police superintendent who has bought a castle in the dismal and remote loch-side village of Drim. The former police bigwig, nicknamed Handy, has been hearing howling, “haunted”, noises from the disused tower attached to his historic home. Hamish and Charlie agree to spend a night in the tower to dispel the myth of a ghost.

What they find however is not an airy-fairy ghost but an honest to goodness dead body.

And so begins an investigation into the residents of Drim and uncovering their secrets and desires and along the way there are more murders.

As well as the murder enquiries, we catch up briefly with all of Hamish's previous colleagues who have spent a short while with him in his police station/home in Lochdubh and his former love-interests Priscilla and Elspeth make brief and slightly longer appearances respectively.

I dive into this series whenever I need a bit of light relief and a trip to beautiful countryside. This one caught me particularly off guard with the identity of the murderer. M C Beaton manages to keep this series fresh, despite it having over thirty entries and I always look forward to the next one. If you like one, you'll like them all.

British cozy crime is having a bit of a resurgence at the moment and if you like that sub-genre then why not start with the very first Hamish, DEATH OF A GOSSIP.
Posted by Karen (Euro Crime) at 9:00 am