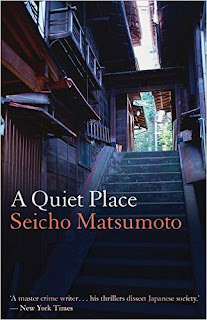 What a pleasant surprise! Considered one of the most important (and prolific) writers of crime fiction in his native Japan, this is only the fourth novel from Seicho Matsumoto to be published in English (and the first to originate from a UK publisher). Well-chosen by Bitter Lemon too, showing another side (at least to this UK reader) of Matsumoto’s talent.

Matsumoto first wrote prize-winning mainstream and historical fiction, then experimented with crime in short story form (some, including 'The Face', considered the best short story of its year by the Mystery Writers of Japan, are collected in THE VOICE, published in the USA in 1989). In 1957 he published the ground-breaking POINTS AND LINES (1970 in US), a rare combination in Japan at that time of a crime story laced with acute social observation, often critical, of the society that surrounded him, a form he would champion throughout his life (he died in 1992). The book was a huge success, broadening the appeal of crime fiction throughout Japan. In the early '60s he wrote both what became in English INSPECTOR IMANISHI INVESTIGATES (Soho Crime US,1989), and PRO BONO, which took over 50 years before it became available in English (Vertical US, 2012). The first is a classic of painstaking police detective work, the latter both a mystery and a raging indictment (in the Japanese manner) of aspects of the Japanese justice system.

Now comes A QUIET PLACE (1975) written during a later period of Matsumoto’s career. Tsuneo Asai, a middle ranking civil servant working in a far from glamorous role in the Ministry of Agriculture and Forestry, is on a business trip with his boss when a phone call from his sister-in-law tells him that Eiko, his wife, eight years his junior and with a history of heart trouble, has died of a sudden heart attack. First ensuring that his boss is not inconvenienced in his absence, he immediately returns to Tokyo. After the funeral he visits the cosmetics shop where his wife collapsed and died. It’s in a quiet suburb of Tokyo that, suspiciously, Eiko had never mentioned to him “ever”. He starts to ask questions.

From these low-key, even mundane ingredients, Matsumoto slowly builds a fascinating tale. Tsuneo, for example, at first appears to have much in common with the “nondescript” but dogged detective Torigai of POINTS AND LINES, and the “worn-out” Inspector Imanishi. But here his quest, pursued with quiet, painstaking intelligence, is filled out by a great deal more personal detail. His deference to authority, and to his wife’s ill-health, his morality (Japanese sexual mores are explored in some detail), his driving ambition (but within the established hierarchy), all add up, given the later noir-ish developments in the novel, to an individual irrevocably caught within an unforgiving social system. He is far from, say, the amoral protagonists of Patricia Highsmith.

That said, the later twists in the tale and Tsuneo’s actions surrounding them, shows him in a much more calculating light. Note too that an action that sets the plot in motion at the start of the novel, is also key to the ending. Can you spot what it is?

A QUIET PLACE is a worthwhile crime novel and one that lives up to Matsumoto’s reputation as a keen critic of his country’s social mores. Let us hope that Bitter Lemon Press will continue to explore and make available more of his work.