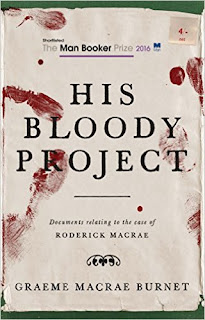 This book, set in a remote crofting community in north-west Scotland in 1869, has been short-listed for the 2016 Man Booker prize. This well-deserved nomination speaks volumes for the quality of this wonderful novel: if you only read one book this year, then make sure it is this one! The author, Graeme Macrae Burnet, was the recipient of a Scottish Book Trust New Writer’s Award in 2013 and HIS BLOODY PROJECT is his second novel. Clearly a man of talent, Burnet is another one of those Scottish authors that we should most definitely keep a close eye on.

HIS BLOODY PROJECT is about a murder. A gruesome triple murder that shocks the small community where both the murderer and his victim live. The guilty party is a young man who goes by the name of Roderick Macrae. He is seen by his neighbour shortly after committing his dreadful act - covered in blood and carrying his weapons. There is no doubt that he is the guilty party and he is more than willing to admit what he has done. However, there is a question over his motive, and his sanity at the time of the crime, and his counsel bravely sets out to save him from the gallows. The novel consists of a series of reports, written by various officials to document the evidence of this shocking event and their opinions concerning the accused. They make for pretty somber reading but are nothing compared to the account written by Roddy himself, as he attempts to explain what he has done.

I am extremely grateful to both Karen and Contraband for giving me the opportunity to review this book. Every so often you get the rare opportunity to read something that is incredibly special and this is one of those occasions. I am still haunted by HIS BLOODY PROJECT: The vivid descriptions it contains of life as a crofter in the 1800s show that conditions were very far from pretty. The book is so harrowing and realistic that I even had to stop reading and find out whether the plot was based on a true story. If you like to be disturbed by what you read and enjoy first-rate thrillers that won’t let go of you when you have finished them, then you are going to love this book.