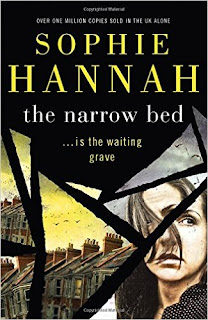 Kim Tribbeck is a stand-up comedian who has recently divorced her husband, Gabe, and has given up her lover, Liam. Kim was given up for adoption as a baby and has only recently found her family who were less than keen to welcome her. Unfortunately her birth mother died before she could meet her and now Kim's grandmother is dying in hospital.

At one of her gigs. Kim was given a little white book with a few lines of poetry written in it. She throws the book away but a year later connects the book with murders of pairs of friends who also had little white books found by their bodies. As Kim considers herself a person without friends, someone who doesn't have to depend on anyone, she cannot understand why she has been targeted by the killer but she does take her concerns to the police.

The team investigating the "Billy Dead Mates" killer includes DC Simon Waterhouse - a brilliant detective who has leaps of understanding that helps him solve cases, but who has difficulty working in a team. His wife, DS Charlie Zailer, although no longer working on his team, is drawn into the investigation although she is rather more interested in what her sister, Olivia, is up to.

This is the latest in the series featuring Simon Waterhouse and Charlie Zailer but can easily be read as a stand alone. I think one of the most appealing features of Sophie Hannah's books is her characterisation and her ability to include a level of description that makes her characters and situations interesting and engaging without slowing down the story.