US Cozy Review: Flipped for Murder by Maddie Day 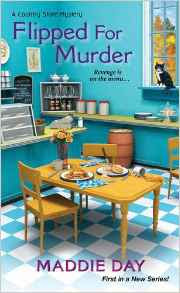 FLIPPED FOR MURDER introduces Robbie Jordan who at the beginning of the book is opening up her new restaurant/cookshop, Pans 'N' Pancakes in South Lick, a small town in southern Indiana.

Robbie had been the chef at a local hotel but when the property in South Lick became available she was persuaded by her aunt to take it on. Assisted by her aunt and another friend, Phil, she has opened right on time.

Her first two customers are the new mayor and her assistant, Stella Rogers - a woman not well liked. Business is good and Robbie meets an old friend of her late mother. Though her mum was from South Lick, Robbie grew up in California not knowing who her father was. One of the threads in the book is her investigating her parentage.

Robbie hasn't dated much since her divorce but now finds herself being asked out by her property lawyer, Jim. So all is going well until Stella's dead body is found with her mouth stuffed with one of Robbie's signature cheese biscuits. Not only is Robbie under suspicion but her business could suffer too.

Robbie is not happy being a suspect so decides to investigate the case herself. This, along with recreational cycling, the upswing in her love-life, looking for her father, discovering a cat and running the restaurant - keeps her busy.

I enjoyed reading FLIPPED FOR MURDER, discovering more of Robbie's past as the book went on. There are also many interesting secondary characters and the author includes the local dialect to give the book a different feel. I also liked that the local police were not portrayed as buffoons.

As a vegetarian I have to quibble over the author calling Jim a vegetarian when in fact, as he eats fish, he's a pescetarian. Nonetheless it made for a pleasant change to have an almost vegetarian as a fairly main character.

The second book in the series, GRILLED FOR MURDER, is out now and I look forward to catching up with the residents of South Lick.