Blog Tour: Review of A Deadly Thaw by Sarah Ward

Just under a year ago, I reviewed Sarah Ward's debut, In Bitter Chill, for its blog tour and I was very pleased to be invited back to review book two, A Deadly Thaw. 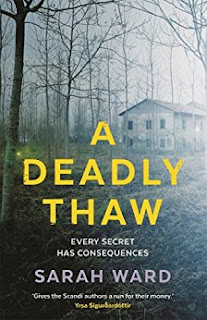 I work in a public library which is really strapped for cash so I have been making the (too) few copies we have of IN BITTER CHILL, work as hard as I can. I was rewarded with one of my regular customers responding to my enquiry as to did he like it, by him replying...”It was bloody brilliant!”.

I too really liked IN BITTER CHILL and have been eagerly awaiting the sequel, A DEADLY THAW, also set in Derbyshire's Bampton.

The three detectives from IN BITTER CHILL, DI Sadler and his team DS Palmer and DC Childs (Connie) return and are confronted by a conundrum. Local man, Sadler identifies the newly dead body found in a disused and isolated morgue building as a contemporary of his, Andrew Fisher, however, Andrew's wife Lena has recently completed a long prison sentence for the murder of her husband.... So who was the man she killed, where has Andrew been hiding and why has he been killed now?

As Sadler wasn't very involved in the initial investigation in 2004, his team are tasked with finding out the answers to these questions. The obvious thing is to ask Lena about the dead man found in her bed. She is reluctant to answer and things get more difficult when she disappears. Her sister, Kat, believes it's a voluntary absence but is perplexed when Lena apparently sends her clues via a teenage boy. Whilst the police carry out their investigation, Kat, a therapist, gets help from one of her clients, and tries to find Lena herself.

With chapters left on cliff-hangers, alternating points of view and occasional time shifts, you can't help but race through A DEADLY THAW to get to the bottom of all the mysteries. As well as the crime elements there are developments in the relationships between the team members and already these characters are well established and real and you want to know what's happening to them outside of work. A DEADLY THAW is a darker book than the first, has an even more complicated plot, and looks at policing in the past compared to the more empathetic experience we (particularly women) would hope to get today when reporting a crime.

Roll on the next in the series, A PATIENT FURY...

Yesterday's stop on the blog tour was at Crime Watch and tomorrow's is at Liz Loves Books.
Posted by Karen (Euro Crime) at 9:00 am