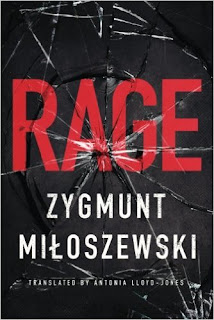 Olsztyn, Poland, November 2013.
In the morass of Olsztyn’s traffic system, Prosecutor Szacki can feel his belief in the sanctity of life waning – particularly regarding Olsztyn’s traffic designer. It is a cold, damp morning with some kind of persistent frozen sludge falling from the sky and accumulating on his windscreen. He considers running the lights, but being caught by the traffic police would be a dark stain on his service history as a state prosecutor. He ponders the mishmash of architecture in this once German city as he drags his old Citroën through its clogged streets. He has no great love for the Germans, they destroyed so much of his home city of Warsaw, but he considers the only characterful buildings in this city to be those built by its German administration. This morning he is due to make a presentation at a local high school. He is mortified, when he finally arrives, to find he is also expected to make a speech.

In the suburbs, a woman contemplates her endless list of imperfections. She tries to chose something to wear that will please her husband. From another room her small son lets out a wail. She rushes to soothe him, tries to find a DVD to stop his crying. What has she done with the day? She puts the kid in his high chair and gives him microwaved pancakes with cottage cheese. She’d better put on some make-up, get down to the supermarket, buy some real food and cook a proper meal for them. “Don’t want it!” yells the kid. She rushes back to her son. Can’t believe what she sees. The kid has encased the new, designer-smart, universal remote with cottage cheese and is aiming it at the TV whilst shouting for the Teletubbies. She could rip his head off. Really. But instead she snorts with laughter and hugs him, daubing her sweater with cottage cheese.

Szacki thinks his image represents the strength and stability of the Polish State – prematurely white hair, his “Bond” outfit of grey suit, sky-blue shirt, skinny grey tie, cuff links and steel watch. Standing on the assembly hall’s platform he stares out at the students. The speech looms. He wants to be upbeat, start with a joke, but he realises this isn’t his style. After a long, awkward silence, he starts his address: “The statistics are against you...” and coldly lists the horrors which are the crimes they are likely to commit during their lifetimes: theft, violence, murder, harassment, rape. If they want to avoid this outcome, the answer is simply – “Do no wrong.” The head teacher glares at him and herself hands the framed certificate to the winning student. Applause. Slipping away, Szacki answers his boss’s phone call with relief. Roadworks (what else) have exposed an “Old German”, their slang term for a long-dead cadaver. All he needs to do is go over and check it off as such.

The hole in the road has revealed an underground room, some kind of offshoot from the hospital. The body, lying on a rusted bed frame, is indeed no more than bones. A complete set. Szacki signs the remains off and heads home but with a sense of dread. Since August he has shared his home with the “Two Witches”: his girlfriend and his daughter, an unhappy sixteen-year-old recently transplanted from Warsaw when her mother, Szacki’s ex-wife, moved to live abroad with her new husband and his research job in Singapore. Szacki had found it fine living with his girlfriend and fine with his daughter. But the two together was another matter.

At the office next day Szacki listens to junior prosecutor Edmund Falk’s report. Szacki knows that the rest of the legal system have dubbed them “king of the stuffed shirts” and “prince of the starched collars”. Truly, in Falk, Szacki has met his buttoned-up match. He is just about tolerating Falk’s jibes at Szacki’s performance at Falk’s old high school when he is summoned by Professor of Anatomy, Professor Frankenstein no less, to the University Hospital’s anatomy department. The professor has been examining the “Old German’s” bones and has found a remarkable component: a modern prosthetic toe joint. So modern in fact that this particular one was fitted only two weeks ago….

Miloszewski’s third “Prosecutor Szacki” novel – RAGE – begins with a murder. It’s a shocking murder on many levels, springing out from the book’s first pages and vividly painted as a physical struggle between two bodies – one to kill and one to survive. A great hook. Most of the rest of the novel is written in flashback, describing the events of the previous ten days which start with skeletal remains being found in a basement tunnel in the Polish city of Olsztyn. These turn out to be not only very modern but composed of bones from more than one body and Prosecutor Szacki begins to think he has a serial killer on his hands, one who likes to dissolve his victims in lye. But the cases are not so straightforward. Not all the victims are dead. Some have been mutilated and left to live in terror. Szacki must find this madman soon. Even sooner when the threat and fear touches him personally.

Stitching his crime themes throughout the fabric and imagery of each of his novels, the theme which runs through Miloszewski’s RAGE is domestic abuse, more particularly, the abuse of women. He even uses Greek myth to underscore his topic, when the co-owner of a travel agency explains the subject matter of a poster on the agency wall, a reproduction of Iphigenia in Tauris (modern day Crimea). The myth’s story is told in shorthand: a Greek tragedy, a family tale of murderous fathers, mothers and sons. In this novel Szacki is older and psychologically darker as his Sheriff of Cool stance is increasingly disrupted by his own rising sense of rage. But RAGE is a terrific story, convincingly translated by Antonia Lloyd-Jones; full of potential suspects for the reader, full of suspense, strong characterisation and a tang of one of Miloszewski’s own crime writing heroes, Henning Mankell. But this is Mankell through Miloszewski's lens of wit and irony laced with affection.

In an author’s note at the end of the book, Miloszewski reveals that RAGE is the final episode in a trilogy featuring State Prosecutor Teodor Szacki. I have read all three – ENTANGLEMENT, A GRAIN OF TRUTH and now RAGE – and have become a devoted fan of Szacki. If this review tempts you, then read them all. You must. Myself, I shall miss Szacki’s elegance, irony, sarcasm and flawed calm. In fact I shall have to miss Miloszewski's crime writing altogether as he has announced (in a blog interview and a guest post on “Crime Fiction Lover” and “Reader Dad” respectively) that he has also given up writing crime fiction.

“It’s always better to stop too soon rather than too late” he says. In Miloszewski’s case – not for this reader.