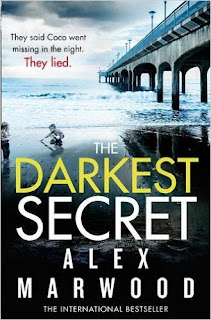 This is one of those “read in a sitting books”: well plotted, believable characters and a gripping storyline. The story moves between 2004 and the present day. Sean Jackson, a wealthy builder, was fifty years old in 2004 and celebrated with his wife Claire and their twin three-year-old daughters Coco and Ruby. They had taken over a house that Sean had renovated near Poole, Dorset. Also present were: the Gavilas – Maria and Robert - she is in media communications, he is a solicitor; the Clutterbucks, Charlie and Imogen - he is a Tory MP strongly tipped for the Cabinet and Jimmy Orizio, a doctor, and his wife Linda. There are children of similar age to the Jackson twins as well as Robert’s teenage daughter.

Sean's daughters from his first marriage – teenagers India and Camilla arrive but Sean was not expecting them and there is a row. There are builders next door, the weather is hot and the noise and heat make tempers rise. Over the weekend Coco goes missing.

The story in the present day is seen through the eyes of Camilla Jackson – now wanting to be known as Mila. It is eleven years since Coco’s disappearance and no sightings have been made. Sean divorced Claire and married Linda. Linda was killed in an accident at one of the homes they were renovating. Sean then married Robert's daughter Simone who is a similar age to Mila. Sean is found dead in embarrassing circumstances in a London hotel. The funeral is planned in Devon. Mila is persuaded by Claire to collect Ruby, the surviving twin, to go to the funeral. Claire won’t go to the funeral nor will India who now lives and works in New Zealand.

What happens at Sean and Simone’s home in Devon will have devastating consequences for all concerned. The Gavilas are there as well as the Clutterbucks, though he is no longer an MP,  and the disgraced Jimmy Orisio who was struck off the Medical register for impropriety, as well as Mila and Ruby.

I have never read anything by this author before, but I intend to read both of her previous books – THE WICKED GIRLS and THE KILLER NEXT DOOR. She is a journalist and writes well and is an excellent storyteller. I can't recommend this book enough. Brilliant.

Ok, wow.... this sounds brilliantly dramaful. It is on my TBR list but I didn't remember what it was about.

It does seem like a lot of characters though. You have me excited about this one now.

Yes, I will have to find this book. Wicked Girls was in my Bouchercon bag last fall. I could not put it down. It was sad and realistic. The ending was not what I wanted to read. Six months later I am still thinking about the story.