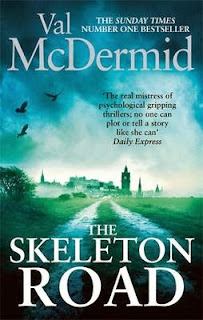 In an old abandoned building in Edinburgh, a surveyor struggles with his fear of heights to check the state of the roof. He is horrified when he finds the skeleton of a man hidden in a turret at one of the corners. The small Cold Case specialist unit is called in to investigate. When the death is found to be the result of a gunshot eight years previously, Detective Chief Inspector Karen Pirie and her assistant DC Jason Murray, must first identity the body before starting to get to grips with finding the murderer.

Meanwhile in Oxford, Professor Maggie Blake is reluctantly celebrating her fiftieth birthday. She has a long and successful career in the subject of Geopolitics, particularly of the countries of the former Yugoslavia but her personal relationships leave a lot to desire after the love of her life, Dimitar Petrovic, walked out of her life without a backward glance.

Some lawyers who are working for the International Criminal Tribunal to bring war criminals from the former Yugolavia to trial have been tasked with finding the individual who is killing the very people they are working to bring to justice. Their search leads them to Edinburgh and to Karen and Jason's investigations. Meanwhile the police evidence leads Karen and Jason's search to Oxford, Maggie and the missing Dimitar.

Running through the book are the horrific events in the conflicts leading up to the break up of Yugoslavia in the 1990s including the siege and almost destruction of Dubrovnik. When reading this, I could not help but think of the similar events happening in the world today, the atrocities, destruction and deaths.

THE SKELETON ROAD is a very sad book but a good read as always offered by this author. This is a stand-alone book rather than a continuation of a series.