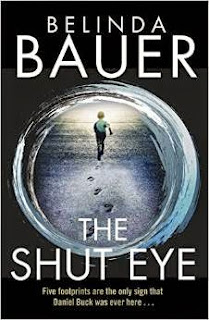 Detective Chief Inspector John Marvel is on his way home to Debbie, when he spots a woman on a ledge, about to jump off onto the rails in front of a train. He tells her a small white lie, that the trains are now longer running as it's after 8pm, and saves her life. The woman is Anna Buck, married to the car mechanic, James Buck, and they both live next door to the garage where he works. Sadly, outside their house, in the cement of the garage forecourt are five small footsteps preserved in cement, the footsteps of her missing four year old boy, Daniel. Anna is badly affected by his disappearance, cleaning the flat with bleach on a daily basis, and looking after a baby that is just a doll. But then she finds a flyer for a meeting in a church featuring the TV psychic, Richard Latham, and she takes the first steps to change, by leaving her house properly for the first time. She goes to the meeting to see what Latham can tell her, because she knows Daniel is not dead. Can she afford to pay him for a consultation? Can he help her find Daniel?

As a foil perhaps to this sadness, the superintendent takes Marvel off his current case (finding a missing girl called Edie) and tells him to find out what has happened to his wife's dog Mitzi (a poodle). Sandra, the wife, is also using Latham to try to find out where Mitzi is, but is refused help. At the meeting, Anna and Sandra connect and Anna takes a photo of Sandra and the poodle away with her. But in a surprising development, Anna has an odd reaction to the photograph, and suddenly has a vision that she can't interpret. Is she getting visions like Richard Latham? Like a 'shut eye'? Could she help to find the dog? What do the visions mean?

A quirky, intriguing story, set in the year 2000, but with the feel of 50 years earlier, particularly in the character of John Marvel, a brilliant but idiosyncratic detective. Anna is a fragile, yet strong-minded character, and the story is focused on her determination and obsession with finding her lost child. Bauer very cleverly builds up the tension precisely and carefully, drawing on our sympathy and engagement with the two main characters. And despite its gentleness, the story slows builds to a dramatic conclusion, as the stories of the lost children (and dogs) are played out. I very much enjoyed this book, and thoroughly recommend it.

I've got The Shut Eye waiting on my TBR pile. I've loved Belinda Bauer's previous books, so I'm really looking forward to getting stuck into this one too :)