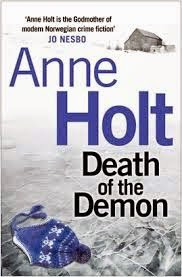 DEATH OF THE DEMON is the third book in the Hanne Wilhelmsen series. First published in Norwegian in 1995 it had its English language debut courtesy of Anne Bruce's translation in 2013.

Hanne has been promoted to Chief Inspector in the Oslo police and she has recruited her best friend and former undercover operative, Billy T, to be her right-hand man.

Their first serious case is the murder of the manager of a foster home. She has been stabbed in her office, late at night, and the only real suspects are the staff and the resident children. In addition, the newest arrival at the home, Olav a very troubled twelve-year-old, has run away on the very night of the murder. Is he involved in the murder or did he see something? Either way he has to be found.

Hanne's team of four officers have to investigate the murder whilst other parts of the force try to track down Olav. As well as the police point of view, parts of the story are told from Olav's perspective as well as thoughts from Olav's mum on her son's odd personality.

As well as the murder investigation, Hanne starts to ever so slightly relax her obsessive secrecy over her eighteen year relationship with Cecilie – only two people at work know about it at the beginning of the book.

This is a classic whodunnit with a limited suspect pool and several red herrings. It's a fairly short book, by modern standards, which held my interest throughout. And it has a shocking resolution. It's a shame this series has taken so long to reach English language readers however DEATH OF THE DEMON doesn't feel too dated. Computers are being used and Billy T even has a mobile phone.

I enjoyed DEATH OF THE DEMON and so went straight on to the next and latest book available in English, THE LION'S MOUTH (2014).
Posted by Karen (Euro Crime) at 9:30 am