Review: Beyond the Rage by Michael J Malone 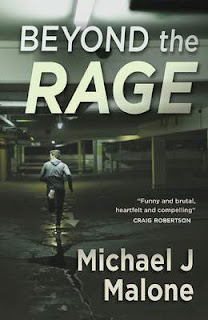 Another corker of a tale from the pen of the talented Michael J Malone, BEYOND THE RAGE is very different to what we have seen before from this author but only goes to show his ability to produce different writing styles – and all to equally high levels of brilliance.

BEYOND THE RAGE is about Kenny O’Neill. Kenny is a career criminal, albeit a loveable one, and a close friend of DI Ray McBain, the protagonist in two of Malone’s earlier novels. We have already seen him save McBain’s skin and now it is his turn to get into a spot of bother. McBain does feature in this novel, but takes only a very minor role - to satisfy those of us that are impatiently waiting for him to make a reappearance in a plot of his own.

Kenny had a troubled childhood. His mum committed suicide when he was a young lad and his dad ran off pretty soon afterwards, leaving him stuck with his aunt and uncle. Now, on his thirtieth birthday, Aunt Vi hands him a collection of letters from his dad and the contents turn his world upside down. Determined to trace the whereabouts of his dad, and discover the truth of his mum’s suicide, Kenny starts to make enquiries. He gets a bit side-tracked, though, when his girlfriend is badly beaten and he wants to help her out as well. In the process of sorting through the mess, Kenny finds out some truths that he rather wishes he hadn’t and the twist at the end leaves him, as well as the reader, gasping in surprise and disbelief.

All in all, this is a superb story and nothing short of the standard we are coming to expect from this talented new voice in Scottish crime fiction. If you’ve yet to read anything by Michael J Malone, then I suggest that you rectify that situation as soon as possible!

Well, you've convinced me with your first-class review. Well done!

I've just begun to blog about crime fiction at my own site --
http://newgatemalefactors.blogspot.com/ --
and I hope you will visit and comment every now and then.

Michael J is in my top 5 all time.

Just read this this week myself, and I heartily agree with the review. Michael J Malone has a superb authorial voice, and that talent for prose which is just a little different, and elevates a crime novel above the masses of good stuff out there to something terrific.