Review: Into the Valley of Death by H R F Keating (as Evelyn Hervey) (audio book) 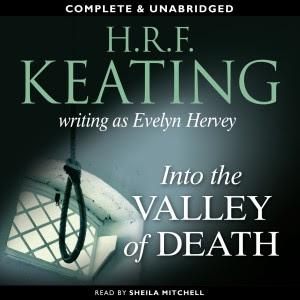 
INTO THE VALLEY OF DEATH is the third and final book featuring governess Harriet Unwin written by H R F Keating as “Evelyn Hervey”.

Set in the latter part of the nineteenth century, Miss Unwin is called to Chipping Compton by Vilkins an old friend from their orphanage days. Vilkins is working as a maid but is currently helping out at the pub as the landlord is due to be hanged in a few days time for murder unless Miss Unwin can use her detective skills and find the true killer.

Jack Steadman, the landlord, was found unconscious in the woods next to the dead body of Alfie Goode. He is an ex-soldier and well-respected and yet the evidence is pointing to him. Miss Unwin, assisted by Mr Heavitree, a retired Scotland Yard inspector, must dig around and go undercover to save the poor man's life. Will she make it in time?

Miss Unwin is a resourceful, brave investigator who doesn't yield to threats and puts the doubting men in their places. She has managed to elevate herself in society from a humble start and is sometimes reluctant to go back down but she does it, as well as some other unladylike behaviour, in her quest to save Jack Steadman.

INTO THE VALLEY OF DEATH is an enjoyable historical crime novel, splendidly narrated by Sheila Mitchell, which tells an interesting story in a mere six cds. The first two books, THE GOVERNESS and THE MAN OF GOLD are also available on audio book.


I found the references to the Crimean War fascinating – not a period I did at school - several of the characters were involved in the Crimean War and took part in the Charge of the Light Brigade and the local area is named 'The Valley of Death' as featured Tennyson's famous poem.
Posted by Karen (Euro Crime) at 9:15 am

Why do some writers use this name 1 writing as name 2 nonsense? Feels like someone wants to have their cake and eat it too. I always presume that name 1 wrote in a bit more literary style, wanted to write some drivel for a change but didn't want to tarnish the reputation, but then name 2 sold like hotcakes, and voila! Makes me feel like someone played a trick on me. What will we see next, 100 Shades of Grey by Margaret Atwood writing as E. L. James ?