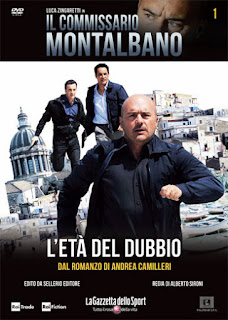 The yacht of a wealthy woman docks at Vigata's harbour as a disfigured body is discovered at sea. Coastguard Laura Belladonna is assigned to the case to assist Montalbano and the two soon become close. The investigation casts doubts on the motives and sincerity of the yacht's crew and Montalbano begins to suspect that there may be more to the story they have given him.


The Age of Doubt is actually the last episode shown in Italy however there is good news. Luca Zingaretti is reprising the role for four more episodes. From (a Google translation of) Sorrisi.com:


How many new episodes of Montalbano is running?
"Four, the last two novels out," The game of mirrors "and" The smile of Angelica, "and two as yet unpublished," A blade of light "and" The Voice of night. '"
Posted by Karen (Euro Crime) at 1:50 pm