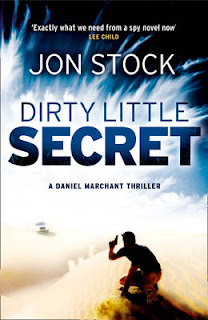 Salim Dhar, the world's most wanted terrorist and Daniel Marchant's half-brother is in the UK. Daniel and his girlfriend - CIA agent Lakshmi - are safe at an MI6 training centre in Gosport. The CIA think both are traitors.
What no-one but Dhar, Daniel and Daniel's boss, Marcus Fielding, know is that Dhar is prepared to work for MI6. He will help keep Britain safe in return for his freedom.
When Dhar allows himself to be captured, his fee for working for MI6 is that he is allowed to escape from the Americans when he is taken to one of their detention facilities, Bagram in Afghanistan.
With Daniel wanted by the CIA, he has to go on the run and calling on friends for favours he crosses Europe and beyond eluding both the Americans and the Russians while fulfilling his side of the agreement. Meanwhile back at home Fielding is ousted by his deputy Denton whom Marchant believes is working for the Russians...
All the chasing and subterfuge is leading to a memorable terrorist attack, approved by Dhar, one the world will not forget. Will Daniel play along or is it a step too far?
Though I've now read all three, I read the previous two on audio book and I could still hear Paul Panting's superb narration in my head. It appears he wasn't available to record Dirty Little Secret
so I decided to switch to the print book rather than get used to another narrator at this late stage.
I raced through Dirty Little Secret with its exciting story and the constantly changing point of view and short chapters (124 chapters in 434 pages) with the irresistible temptation to read just one more chapter. I've really enjoyed this trilogy, and I do hope Jon Stock writes more. This spy series, unlike Stella Rimington's books, has sanctified torture and corruption at the highest levels and does not put the 'powers that be' in a very good light!
There are several references to the events in the earlier books and sufficient explanations for those who've not read the previous two but I would recommend reading them in order to avoid the inevitable spoilers that crop up in Dirty Little Secret.
Posted by Karen (Euro Crime) at 9:04 am

Thanks for this review. I was always on the fence about Dead Spy Running, because of a few lukewarm reviews, and so I have not read any of this series yet. I will follow your advice and start with DSR and look forward to an interesting spy series.