I'll be posting an interview with Deon Meyer tomorrow to coincide with the UK publication of 7 Days. Euro Crime will be also reviewing some of his earlier titles which have just been reissued. Today's review of Dead Before Dying, Deon Meyer's first book, is by Michelle Peckham. 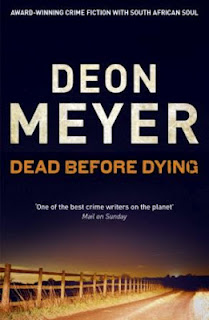 Captain Mat Joubert, Murder and Robbery detective, is still going through the grieving process after the murder of his wife, Lara. He is overweight, drinks and smokes too much, and does no exercise. Colonel Bart de Wit, the new commanding officer is determined to change things, and one of the things he expects is for everyone to invest in their own physical and mental health. He tells Mat to "shape up or ship out". He schedules him for a medical and mental examination, and Mat has to start exercising, dieting, and facing up to his loss. Meanwhile Mat has the infatuation of his neighbour's teenage daughter to contend with. And then, there are the crimes he has to solve: the bank robber with an unusual approach, and the serial killer.

While part of the novel is, of course, about solving the crimes, there is a huge focus on the main character, Mat. And it’s the recounting of Mat’s own story as well as the detective work needed to catch the robber and murderer that make this book stand out. As Mat becomes engaged with finding the perpetrators behind the robber and the serial murders, the novel also recounts his recovery process, his complex and supportive interactions with other members of the detective squad, his gradual adjustment to his new boss, the coverage of his investigation by the media, his developing relationship with his new psychiatrist and his attempts to get fit and lose weight. Conversations with the psychiatrist help him start to come to terms with his wife's death, and these act as an important vehicle to describe whom Lara was, what happened to her and why Mat feels responsible. As the psychiatrist happens to be a woman, inevitably Mat also starts to find himself attracted to her. While again, perhaps this is also part of his recovery process, it also becomes an important part of the story.

Then, on a lighter note, there are the occasional descriptions of Mat’s diet, which almost read like a male version of Bridget Jones's diary ("dinner was 60 grams of skinless chicken 60 millilitres of (fat free) gravy, 125 millilitres of mixed vegetables, and as much boiled (tasteless) cauliflower as he liked…and after than, one full flavoured Winston, one tot of whisky."). And thrown into the mix is the background setting of South Africa, which adds to the interest and novelty of the story.

I really enjoyed Dead Before Dying. I liked the complexity of the main character, the interactions between the detectives, and their dogged determination to find both the robber and the serial murderer. Good detective work helps discover who the bank robber is. The discovery of the identity of the serial murderer is more challenging, and it's only as connections are slowly drawn between the victims, that it starts to become clear who the murderer is, and what their motivation might be. A sad, tense denouement ends the book, with an unexpected twist. I'd highly recommend this book. I've enjoyed all the Deon Meyer books I've read so far, and this one is no exception.

Michelle Peckham
Posted by Karen (Euro Crime) at 8:30 am