Who is Ricardo Cupido?

Private Investigator Ricardo Cupido is Spanish author Eugenio Fuentes's series character and makes his fourth appearance (in English at least) in the recently published At Close Quarters (tr. Martin Schifino), he describes himself on p51: 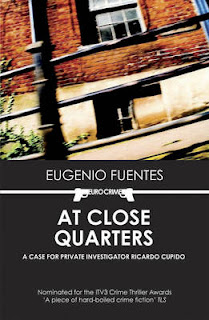 He’d never been someone given to confidences or talking about himself, but with the passage of time he was becoming even more secretive. He hid from everyone his disappointments, his loneliness, his fears and how fed up he was with his job, the profession that led him to believe that no person can love another forever. He kept those impressions to himself, where no one might see them and point out their painful harshness. Looking back, he realised he’d been able to salvage very few things from the wreckage of time, that the wealth of his youthful dreams had rotted before they could come true. He no longer hoped to have children. Nor did it seem likely that he would have for a woman feelings as intense as when he had first loved. He no longer believed that an ideology could make the world a better place; and as for the human condition, well, he’d seen his fair share of evil and misery, and had concluded that some men can only do harm. He’d seen people die and people kill. It was true that, when he thought of the future, the moral landscape he identified in himself was not lacking in dignity, but it wasn’t the kind best shared with anyone else. He was over forty and knew that, unless he did something about it, he’d get lonelier as each year passed. Up to this age, he often told himself, most of the people one has met and known are alive, but from now on the balance will start to even out, until the presence of the living weighs as much as the memories of the dead. And a little later everyone would start dying around him, if his number didn’t come up first.
Posted by Karen (Euro Crime) at 1:53 pm

Boy that cheers me up.
Now seriously, I am ashame this is the first time I have ever heard of Eugenio Fuentes. I will have to find more about this Sapanish author who seems to be better known outside Spain. Thants Karen for sharing Eugenio Fuentes with us.

I hope I've got them in the correct order. This one, At Close Quarters, was published in 2007 as Cuerpo a Cuerpo. (Cupido first appears on p47.)

Hope you find out more about this author. Ann Cleeves likes his books very much. This is my first.

Yes, thank you Karen. I am looking forward to reading this book. Always nice to find a new author in translation to read. Your last recommendation, Gunnar Staalesen, was excellent I thought (not least because of the translator ;-) )