Premiere: The Girl With the Dragon Tattoo (film) 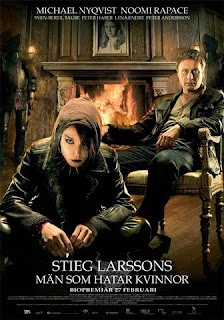 Thanks to publishers Quercus, yesterday, Maxine (Petrona) and I, with some familiar faces from crime fiction reviewing joined several hundred horror fans to watch the English-subtitled premiere of Millennium I: The Girl with the Dragon Tattoo at the Film 4 Frightfest in Leicester Square.

An excellent job has been made of getting to the heart of the book, cutting out some of the romantic subplots and making the most of its two main characters Mikael Blomkvist and Lizbeth Salander.

What's left is a taught thriller/who-dunnit with the pair working together to find out what happened to Harriet Vanger who disappeared, thought killed, over 40 years ago. Though long, the story never drags and the performances are superb.

The locations matched well with my visualisation from reading the book with one exception - the size of the bridge that isolates the island. In the film it's huge and I had imagined a little humpback bridge!

I'd be interested to hear what people who haven't read the book already thought about it. The audience seemed to enjoy the film and were rooting for Salander in a couple of the more horrific scenes where she takes her revenge.

The trailer can be found here on IMDB.

More on the series of films can be found on the production company, Yellow Bird's page.

The film will be released in the UK next Spring.

Labels: Millenium film, The Girl with the Dragon Tattoo

As we were discussing over a nice hot chocolate and cup of tea yesterday, what a fantastic film! I'm definitely going to see it again when it opens in the UK (April?). It was great - I'm going to try to write a review if I can get my brain into gear. I liked reading yours, and will check out those links.

Very, very, jealous. I do hope it will be showing at at least one of our two art house cinemas in Exeter and Dartington.

It sounds amazing! I can't wait to see it.

I am extremely jealous also

Wow. I didn't even know it was going to be turned into a film. The trailer you linked to makes it look amazing. Can't wait for the UK release, but do we really have to hang out for next Spring?

There was a bad PA announcement and we think she said April for full release. Strange not to capitalise on the frenzy of #3 release...

It's a fairly faithful adaptation but with some improvements as well.

I should have a DVD arriving any day now. Will advise if it has subtitles.

DVD has arrived. Only subtitled in Danish, Swedish, Norwegian and Finnish, unfortunately. I suppose it would have been to easy to have English and to be able to bypass the cinemas.

Just watched this most fascinating film earlier this evening. English subs are out, but they are a little rough, not a perfect translation, but certainly good enough that you can read them and understand what they meant to say. The film is one of the finest mystery films I've seen in my life, reminiscent a bit of Alfred Hitchcock, but with a decidedly European flavor. It is well edited so you don't lose interest, ever. I've never seen the actress who plays Lizbeth before, but she is superb as a slightly unhinged and psychotic genius. After you learn more of her story, you find yourself cheering for her. Overall, a wonderful film. I hope one day they dub it in English and distribute it far and wide. It's definitely a world-wide winner all the way. A must-see film!!

You can see the film at the Arts Picture House in Cambridge on 21st and 22nd Septembeer.

Just wanted to let you all know that the Swedish movie adaptation of the book is coming to UK cinema's on March 12th 2010.

Its an incredible book and the film is said to be a very close adaptation.

For more info, including images, trailers and competitions check out - www.facebook.com/thegirlwiththedragontattoouk

Cheers all, let us know what you think!

Want to see the Girl With The Dragon Tattoo first and for free?
Head to our Facebook page where we’ll shortly be announcing details of free preview tickets – plus enter our comp for a holiday to Sweden!
www.facebook.com/thegirlwiththedragontattoouk

Where do you find it with english subs? I don't care if they are rough I read the book so I can get an idea what they are saying.

I just saw this film. I haven't read the books but I went with someone who has. We both thought the film was excellent and my friend said it was largely faithful and the actors used were perfect choices.

This for me is one of the most gripping thrillers I've seen in a long time, it was great to see it unfold. I actually can't wait to see what happens next, I hope the other two films get a UK release soon.

Finely directed and acted, I would highly recommend this film to any fan of thrillers or crime novels.