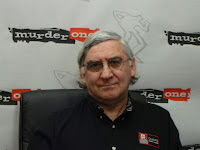 Maxim Jakubowski, the multi-tasking, multi-talented owner of Murder One and editor of Paris Noir which goes on sale today, has kindly answered a few questions for Euro Crime's first interview.

EC: How did Paris Noir come about? Was it your idea or were you approached by Serpent’s Tail?

MJ: It was my idea. A decade or so ago, I did a London Noir volume for Serpent’s Tail, and had always intended to do a companion volume. Then the Akashic Noir Cities series came about and the concept was once more to the fore. However, Akashic wanted an all-French author volume, and I was keener to present a blend of nationalities, as being English but brought up in Paris gave me a different approach to the subject. So, I went with Serpent’s Tail, although I’ve just delivered a Rome Noir volume to Akashic recently, this time all Italian authors plus my own obligatory contribution.

EC: How did you decide which authors should appear in the collection?

MJ: The criterion was for English-writing authors that they had to have lived/studied/spent some time in Paris during the course of their lives. On the French side, I just picked personal friends and people I personally admired.

EC: What’s the role of an editor of an anthology like this?

MJ: To get the balance right; get a blend of authors who fit together even though all their stories are pretty radically different in tone or style.

EC: What’s your favourite story from this collection?

MJ: An unanswerable question I fear, although naturally I have a soft spot for my own, in which I brought back a character who has so far appeared in 3 novels and was just right for Paris.

EC: London already has two noir collections, one edited by yourself in 1994 and one last year edited by Cathi Unsworth, which was in fact the first in this Capital Crime series. How does Paris differ from London in the type of stories being told about it?

MJ: Every city has its own psychogeography, inner life, whatever you call it. Cities are at the heart of ‘noir’ and will attract a different kind of story, as seen through the eyes of the respective contributors. I think that, with a few exceptions (Mike Moorcock’s tale being one, but then he only moved to Paris a few months back) Paris generates somewhat more socially-conscious, even political stories, but then the French have always had a more acute sense of politics than us Brits.

EC: Which other cities or countries do you think should have a ‘Noir’ collection and are you involved in doing any more?

MJ: As I mentioned earlier I’ve just delivered Rome. Actually every city deserves its volume and between Serpent’s Tail and Akashic many are already being covered. I’d love to see a Berlin and Moscow volume, but not edited by me. Every book should be curated by someone with a strong affinity for the place. As New Orleans and New York have already been done, that rules me out as I’m sure they will find a native to cover Seattle.

EC: Why do you think European crime fiction has become so successful/fashionable in the last few years?

MJ: Very simple: when it’s good, it’s as good as homegrown mystery writing. It just took the success of Mankell’s books to convince publishers they could actually make a profit with crime books in translation, so now it’s become a fertile area of mystery publishing. Although I would also say that I’m bemused by certain editorial choices and omissions still.

MJ: I enjoy Vargas, Manchette particularly. Not overly fond of most Scandinavians, who just appear to be riffing on the Maigret with angst theme. Still so many deserve to be translated. Can only recommend from languages I actually read of course, Certainly the French contributors to Paris Noir still not available here: Romain Slocombe, Dominique Sylvain, Jean-Hughes Oppel and Marc Villard, but also Maurice Dantec. In Italy there are so many: De Catraldo, Pinketts, Vallorani, Mazzucato, De Silva, Faletti, etc....

EC: Finally, you own Murder One, write books, blog for the Guardian, edit anthologies, organise Crime Scene – how do you fit it all in!?

MJ: I don’t! Actually, I feel as if half the time, I’m somewhat idle and lazy... Mind you, my next novel is a few years behind schedule, so I have to increase my productivity...
Posted by Karen (Euro Crime) at 6:00 am

Great interview! Really fascinating, I must read this book.
As you might guess, I don't agree with him about the Scandinavians, I have read some wonderful Scandinavian authors, particularly the peerless Lisa Marklund, Larsson and Indridason, but there are others (author of Princess of Burundi whose name escapes me, Edwardson and Nesbro).
He fails to mention the Germans as well. I liked the Jan Costin Wagner book I read, and I believe Euro Crime herself is fond of other German authors.

Kjell Eriksson, I think wrote Pricess of Burundi. Of course I also don't agree with him about the Scandinavians.

Not overly fond of most Scandinavians, who just appear to be riffing on the Maigret with angst theme.

First time ever I agree with Jakubowski on something. Miracles do happen after all.

the French have always had a more acute sense of politics than us Brits.