Update - What Happened in July?

Apologies for the lack of book updates, July's releases will be up soon. August's will be later in the month.

So, we've had a few rough weeks chez Euro Crime. Just under a month ago, we had to put one of cats to sleep at the very early age of 6 3/4. Leah had been ill for a while as her kidneys were failing. We nearly lost her at Christmas but she responded well to treatment and was on the way to acting normally. Unfortunately it didn't last and she was deteriorating before our eyes. We tried several new treatments but they didn't work. We and she did have a few extra months together but it has left us both heartbroken.

Ten days later my OH tested positive for Covid (on his birthday and the day Leah's ashes were available for collection). He is now back at work but is feeling the after-effects of his infection. I have tested negative throughout, amazingly, but it has been very disruptive as well as the obvious worry.

Here's our beautiful girl. We adopted her five years ago when she was two. She had been rescued by Cramar Cat Sanctuary about a year prior to that and was found to be pregnant with her leg stuck through a collar which left a scar and the fur grew back a bit awkwardly. Initially she was scared and a bit handsy but she settled down into a gentle cat who would pat you when she didn't want you to touch her anymore. She was always showing her belly off for tickles: 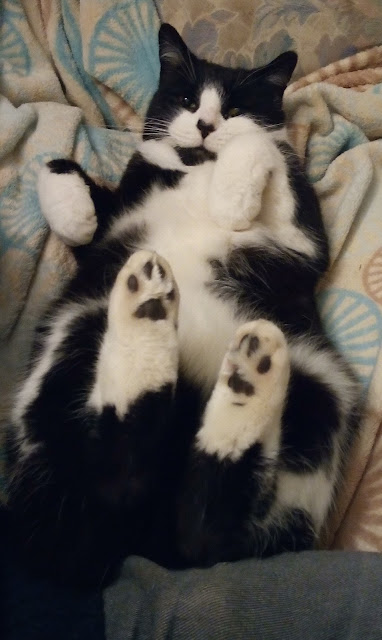 Such a rough month, Karen! I'm truly sorry to hear about Leah. It's hard to lose a furry family member. I hope your OH is feeling better, and that August is a better month for you.

I'm so sorry for your loss, Karen. Cats are wonderful, if often eccentric, friends.

I am so sorry for your loss. My Purrcy has congestive heart failure and is on his last leg.