Welcome to another entry in my irregular feature: US cozy review.
Here are my reviews of Assaulted Caramel and Lethal Licorice the first two in the Amish Candy Shop Mystery series by Amanda Flower.
I have to say I enjoyed these two so much, not only have I bought the rest of the series, but also the first book in the spin-off series, the Amish Matchmaker Mysteries, and the first book in the author's new series, published by Hallmark, Dead-End Detective.
If you are in the UK you might find Lethal Licorice is available via your library's ebook service, Libby. It certainly is, in Birmingham Libraries. 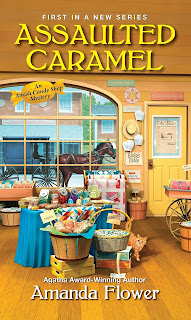 ASSAULTED CARAMEL by Amanda Flower is the first book in the Amish Candy Shop series which features Bailey King, a New York-based chocolatier to the stars.
On the eve of an important job announcement which may affect Bailey’s future, she is summoned to her grandparents’ home in the Amish village of Harvest, Ohio as her grandfather is very ill. When she arrives, she finds her grandfather arguing with a property developer who is snapping up all the Amish shops on the main street. Her grandfather will not sell his candy shop and collapses as a result of the argument, combined with his severe heart disease.
Bailey’s first night back in Harvest does not end well. Retrieving her mobile phone from the kitchen -the only place there is electric - she stumbles over the body of the loathsome property developer, killed with her grandfather’s favourite chocolate-slicing knife. A knife she had used the previous day.
Her grandfather and then herself soon become the prime suspects and she is even suspected (though not really) by the dishy Deputy Aiden.
Bailey has to clear her name but more importantly her ill grandfather’s name and soon so she can return to New York for the job announcement due a couple of days later.
I really enjoyed ASSAULTED CARAMEL. I liked the setting, meeting various quirky residents – including Aiden’s mother Juliet who has a small pet pig, as well as learning about the Amish culture and customs. Bailey is a likeable and funny character and I loved when her city-girl best friend Cass came to visit. I didn’t guess whodunnit and I was pleased that Bailey, with help from her new and clever ginger cat, saved herself from the killer. Indeed, I enjoyed this book so much I went straight onto book two, LETHAL LICORICE. 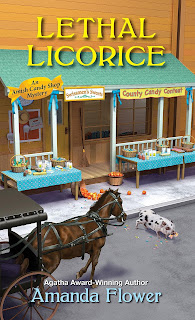 LETHAL LICORICE is the second book in the Amish Candy Shop series by Amanda Flower. After the events in the series debut, ASSAULTED CARAMEL, Bailey King has now left her New York job and friends to help run her grandparents’ Amish candy shop in Harvest, Ohio.

Not being Amish herself, Bailey is struggling slightly to fit in. Various people think she and the Sheriff’s Deputy Aiden belong together, but Bailey’s heart is still sore from her last relationship. In the meantime, she is entering the Amish Confectionery Competition (ACC) on behalf of her grandparents’ shop. The ACC is a huge deal for whoever wins, bringing tourism and income to both the shop and the town it resides in. One of the competitors, Josephine Weaver, is not happy with Bailey entering as she is not Amish, however she is using Amish methodology and has a special dispensation from the organisers.

As well as being shouted at by Josephine, Bailey’s friend Juliet, mother of Aiden, has lost her pet pig and is in a bad way. Bailey and Juliet look around the nearby church and discover a young Amish woman, Charlotte, playing the organ. The organ sounds out of tune and when Charlotte looks inside, she finds the body of Josephine.

Bailey is again a possible murder suspect, this time in the death of Josephine, especially when the cause of death is an allergy to liquorice – which was the very first sweet to be made in the competition. More of a suspect though is Charlotte as she is at odds with her family and district over her wanting to play the organ and them wanting to ban her.

Again Bailey feels she had to clear her own name and also Charlotte’s.

This second book in the series starts almost where most first books in series do - with the protagonist moving somewhere new or back home to start over. So new readers could easily jump in with book two. I have been deliberately quite vague about the events of book one so as to avoid spoilers.

As with book one, ASSAULTED CARAMEL, I enjoyed this very much. It’s a light read with most chapters ending on a cliff-hanger so you want to read just one more. New characters are introduced and the Amish universe is expanded to include neighbouring districts with differing rules. I look forward to reading the rest of the series.

In fact, these books, much like sweets, are hard to resist.