I recently posted my review of THE THURSDAY MURDER CLUB by Richard Osman, on my library's Facebook page. 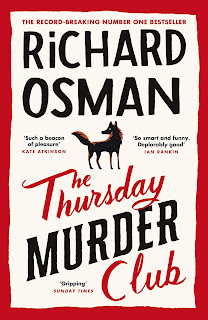 THE THURSDAY MURDER CLUB is ‘National Treasure’ Richard Osman’s debut crime novel and a sequel is on its way. The titular club meets on a Thursday to discuss old/unsolved murder cases and the four current members are Elizabeth, newcomer Joyce, Ron and Ibrahim and they reside in Coopers Chase Retirement Village in leafy Kent.
They soon have a current murder to investigate when one of the builders of the Village is found bludgeoned to death shortly after an argument with his business partner.
Elizabeth, a former secret agent by all accounts, has fingers in many pies and that includes the local police force, following a routine visit from PC Donna who only went there to talk about home security.
Elizabeth is soon at work, getting Donna onto the Murder Squad led by DCI Chris with a view to both teams sharing information.
When a second murder occurs, it brings things closer to home as it seems a killer might live at the Village.
Will Team Elizabeth get to the truth before Team Donna?
This is a very enjoyable read. It’s funny and the characters are a joy. Often in amateur-detective novels the police are portrayed as a bit dim, but Donna and Chris are anything but. Indeed, all the characters are likeable including a few “lovable rogues”. The storytelling is breezy with short chapters and a variety of points of view, interspersed with diary entries from Joyce. It’s well plotted with mystery upon mystery with long-buried secrets reluctantly being revealed.
If you like the sound of this then you might also want to try Simon Brett’s Fethering books, and his Mrs Pargeter series.
Posted by Karen (Euro Crime) at 9:00 am

I listened to The Thursday Murder Club read by the wonderful Lesley Manville and highly recommend the audio version as well.