I recently posted my review of THE MIST by Ragnar Jónasson, translated by Victoria Cribb, on my library's Facebook page. 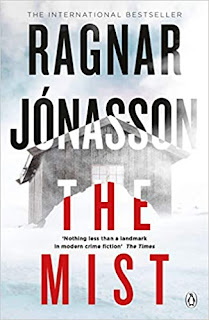 My latest #bookreview is for the chilling (in more than one sense) Icelandic thriller, that is THE MIST by Ragnar Jónasson, translated by Victoria Cribb.
THE MIST is the final (or first?) part of the Detective Hulda Hermannsdóttir trilogy set in Iceland. This trilogy is unusual in that the first book published, THE DARKNESS, is set in more recent times and at the end of Hulda’s career; the middle book, THE ISLAND, is set in 1997 and THE MIST is set in 1987/8.
Taking place at Christmastime the first half of THE MIST revolves around a remote farmhouse in East Iceland. The middle-aged couple who live there are cut-off from the nearest village for several months each snowy winter and so it is most unexpected when they receive a knock on the door. Their visitor claims to be a hunter, separated from his friends. The sense of isolation increases when first the telephone fails and then there is a power cut.
Alongside an increasingly fraught situation at the farmhouse we have Hulda and her family life. Her thirteen-year-old daughter has become moody and withdrawn and when she doesn’t take part in the Christmas festivities things come to a head.
Flash forward two months and the two narratives entwine with Hulda sent from Reykjavik to investigate the discovery of several bodies in a remote farmhouse…
THE MIST is not a long book and makes for a very quick read. The farmhouse-visitor episode is quite nail-biting and lasts quite a while, before there is at least a partial resolution. Readers of the earlier books will be familiar with what’s happening with Hulda’s family but even so, or perhaps because of, it also makes for a tense read. There’s a clever resolution to several mysteries and the wintry, forbidding, claustrophobic setting is well portrayed.
If this is your first outing with Hulda, you’ll be inclined to read more. If it’s your final, you’ll wish it had been a longer series.
Also included is a bonus short story which features policeman Ari Thor from Ragnar Jónasson’s other series, the first of which, SNOWBLIND, also has a wintry setting.

I have been dying to visit Iceland. This book will get me there at least in my armchair. Thanks for the review.

The storyline reminds me of the Icelandic TV thriller Trapped. Though I suppose if you live in Iceland being snowed in isn't such an unusual occurrence.

Thanks for the review