I recently posted my review of DEATH IN FANCY DRESS by Anthony Gilbert on my library's Facebook page: 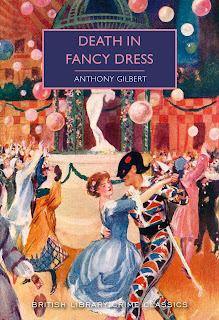 DEATH IN FANCY DRESS was first published in 1933 and is one of the latest ‘golden era’ crime novels to be reissued by British Library Publishing and comes with an introduction by Martin Edwards and two short stories from 1939 featuring an Inspector Field.

The main story is a non-series novel narrated by one Tony Keith, a lawyer, who along with his carefree adventuring friend Jeremy - is summoned first to the Secret Service and then to Tony’s old Manor house home to track down the mastermind behind a blackmail ring which has resulted in many deaths. Jeremy is all set on marrying the daughter of the house but trickily she is already engaged to their secret service contact and it’s not long before she has announced her intention of marrying a third party, a dastardly cousin who seems to have got away with murder in the past.

The suspense builds as many people announce that she will not marry her cousin and of course the title comes true, a body is discovered after the fancy dress party…

With the party not taking part until towards the end of the book there is little sleuthing done by our two young men at first and chance plays a hand in revealing a vital clue. Tony, however, makes for an amusing narrator and the resolution is satisfying and one that makes you revisit earlier events in your mind. Despite being written by a woman – real name Lucy Malleson – women don’t come out of this too well and there are some outdated attitudes of the time to contend with. Nonetheless this is an enjoyable classic country house mystery.

As well as, as Anthony Gilbert, the author also wrote as Anne Meredith and her ‘Portrait of a Murder’ has also been published by the British Library.
Posted by Karen (Euro Crime) at 11:15 am