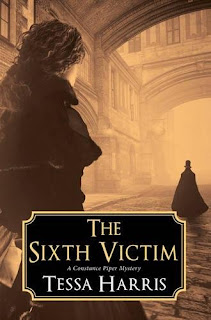 The foggy streets of London's Whitechapel district have become a nocturnal hunting ground for Jack the Ripper, and no woman is safe. Flower girl Constance Piper is not immune to dread, but she is more preoccupied with her own strange experiences of late.

Clairvoyants seem to be everywhere these days. Constance's mother has found comfort in contacting her late father in a seance. But are such powers real? And could Constance really be possessed of second sight? She longs for the wise counsel of her mentor and champion of the poor, Emily Tindall, but the kind missionary has gone missing.

Following the latest grisly discovery, Constance is contacted by a high-born lady of means who fears the victim may be her missing sister. She implores Constance to use her clairvoyance to help solve the crime, which the press is calling "the Whitechapel Mystery," attributing the murder to the Ripper.

As Constance becomes embroiled in intrigue far more sinister than she could have imagined, assistance comes in a startling manner that profoundly challenges her assumptions about the nature of reality. She'll need all the help she can get--because there may be more than one depraved killer out there...

In 2012, I had the good fortune to read for review one of the author's previous books THE ANATOMIST’S APPRENTICE an historical thriller set in 1780 which was about Dr Thomas Silkstone, an American surgeon from Philadelphia, who brings his skills from the US colonies to London. This was the first in a series of six books about Silkstone.

So having an appreciation of her enormous skill as a novelist I was very pleased to read her latest book which is also set in London and is the start of a new series, featuring Constance Piper.

The author has written another highly readable story which has an element of fantasy to entertain the reader and which makes it even more exciting. This was a story which I could not put down until the final conclusion. The author has done considerable detailed research to create a very believable impression of London of 1888, and I was very impressed with this but of course I remember her talent from previous books.

I found the story immensely gripping and fast moving and the pages just shot by in this extremely atmospheric story. Very strongly recommended.