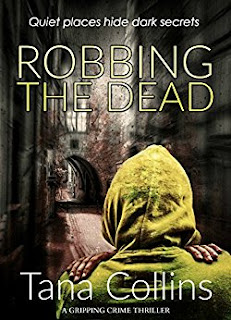 This nail-biting debut by Tana Collins introduces her detective, DCI Jim Carruthers, and heralds the arrival of another top-notch author of Scottish crime fiction. Set in a small town, called Castletown - that is roughly based on St. Andrews but still has an operational RAF base close by, the novel is a treasure trove of interesting locations that will hook in readers who are past and present residents of this unique university town and keep their attention right to the very last page.

The story starts with a particularly gruesome murder in the town, in a back alley. You are drip fed the fact that the victim is a young Welshman, a member of the RAF and knows his assailant, and also find out about the creepy person watching events unfold. That is all you find out. Even the police don't know much more but very soon this killing is upstaged by a car bomb and what looks like attempted murder. Theories abound but all centre on the fact that somebody doesn't like the intended victim’s opinions of the Welsh, particularly Welsh terrorist groups and those who are fighting for freedom. Carruthers, newly arrived in town, is thought to be out of depth on this case and outside help is drafted in, in the form of terror expert McGhee, who once tried to seduce Carruthers’ now ex-wife. There is no love lost between the men and tensions rise as his eyes fall on Andrea Fletcher; Carruthers’ extremely efficient and capable DS.

In their hunt for the intended victim, who has simply vanished, the would-be murderer, and a motive for this crime, as well as still trying to sort out first murder, Carruthers and Fletcher find themselves face-to-face with the aftermath of Bloody Sunday and have to join the dots to find out how everything is connected. They must hurry if they are to be successful as they are not the only ones looking for answers and, indeed, justice.

I loved this book! The story is captivating, well-written and has an ending that you can't see coming. Jim Carruthers is an extremely likeable cop, with enough personal trauma to make him interesting as well as good at his job. The prospect of more books about him and DS Fletcher, in their fight against crime in not-so-sleepy Castletown, is very exciting. In ROBBING THE DEAD Tana Collins has shown, extremely effectively, that she is a force to be reckoned with.