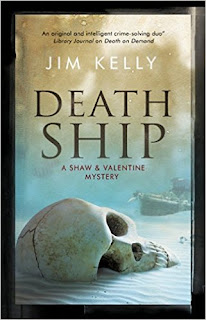 Hunstanton beach in Norfolk. The Ross family are digging, three boys watched by their parents. They reveal a shiny metal object and start to throw stones and suddenly there is an almighty explosion.

Feelings are running high in the town because of a new Pier being built, but much bigger than the original one. Protest groups are organised and there have been various sabotaging incidents.

Detective Inspector Peter Shaw and Detective Sergeant George Valentine have the “Stop the Pier” protests to worry about as well as a missing Dutch man and an elderly lady handing out chocolates at the bus station, some of which are poisoned, and there has been one death so far.

Valentine also has the problem that his lady - Jan Clay (now a probationary police constable) wants them to move to a house with a sea view and away from George's favourite town dwelling. Shaw's wife Lena runs an up-market bar and cafe on Old Hunstanton beach. Their daughter Fran is growing up fast.

Valentine, on surveillance, arrests the woman who is caught handing out poisoned chocolates, but she refuses to answer any questions.

When a diver's net decorated with sewn-in Dutch flags appears on the beach, Shaw is convinced that the Dutch man – Dirk Hartog has been murdered; he was interested in a sunken Dutch ship from the 1950s. Bomb experts are called in after the problem on the beach.

The “Stop the Pier” movement (which includes some local dignitaries) are getting more and more ruthless and seem capable of harming the pier workers. Can Shaw and Valentine keep the peace and solve the riddle of the missing Dutch man and find the motive of the “sweetie killer”?

This is the seventh Shaw and Valentine novel by the author. Coincidentally it now matches the number of books in the author's original series featuring the journalist Philip Dryden. This is up to his usual good standard, keeping the mystery and suspense levels high. Recommended.