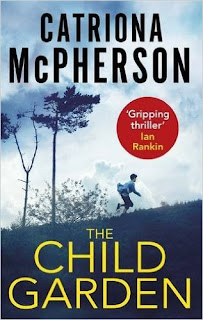 A wonderfully gripping thriller, THE CHILD GARDEN is the latest novel written by Catriona McPherson and will keep you guessing, as well as biting your nails, right until the very end. McPherson has several highly acclaimed novels to her name and currently writes full time. Edinburgh born, she has had a varied life, with jobs ranging from banking to academia, and now lives in California. Her current book is a stand-alone story but she also writes a series about a female detective called Dandy Gilver. THE CHILD GARDEN is my first foray into McPherson’s work. I am very tempted to try some more of it.

Gloria Harkness lives alone with a dog and several cats. She works as a registrar and is also tenant caretaker of an old farmhouse situated next to a nursing home. Every day for the last ten years she has dutifully visited the home to see her elderly, blind friend and her wonderful son - Nicky - who suffers from a terrible physical disability and is terminally ill. Gloria is lonely but one day everything changes when she opens her front door to a long-lost friend who insists he is being stalked. So begins Gloria’s adventure and her decision to help her friend brings a new beginning to her dull and insular life.

Thirty years before our story, the old house had been turned into a school, called Eden. It was a strange place and advertised itself as “an alternative school for happy children”. This, however, couldn’t have been further from the truth and the shocking suicide of one of the pupils meant that the place had to be shut down. Gloria’s friend used to be a pupil at the school. He is convinced something is not right and, when Gloria starts to dig, she discovers that very few of the children are still alive. Most of them have killed themselves in circumstances very similar to the first death all those years ago. Now Gloria’s friend’s life seems to be threatened and together they must hunt for the truth before it is too late.

Gloria is an extremely likeable character. She has had the same, quaint, hairstyle all of her life and seems to wear very old-fashioned, hand-made clothes. Despite her eccentricities, she has some good friends and a good heart. The reader is immediately on her side and willing her on – especially when she confronts her ex-husband about his attitude towards their son.

If you like a good mystery that gets you thinking, with good characters that you want to succeed and be happy, and yet is nasty enough to keep you on the edge of your seat, then THE CHILD GARDEN is just the book for you!