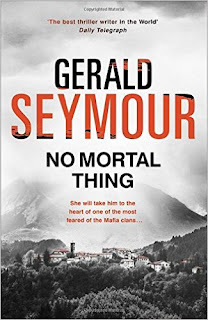 This is the author's latest book and the seventh that I've read for review, although I have enjoyed reading privately many others of his. The quality of his writing and research has not diminished over the years, in fact it seems to get better. I found this latest one just as exciting and dramatic as ever.

Jago is a kid from a rough part of London who has worked hard to get a job in a bank and is now on a fast-track secondment to the Berlin office.

Marcantonio is one of the new generation in the 'Ndrangheta crime families from Calabria, Southern Italy. He is in Germany to learn how to channel their illicit millions towards legitimate businesses all over Europe.

When Jago witnesses Marcantonio commit a vicious assault and the police seem uninterested, the Englishman refuses to let the matter drop.

After an unhappy meeting in Germany, Jago decides to put his job on hold and follow Marconio to Italy and after a chance meeting with a girl named Consolata, who gives him good advice he decides to observe Marcantonio and his Mafia family from under deep cover and debate how he can invoke justice against the offender. In the interest of reading a good story one has to suspend one's disbelief that a man in a very good and highly paid banking job in Germany would on a whim abandon it and go Italy to hurt in some way a Mafia gangster.

The story reminded me of his book A DENIABLE DEATH in that both stories employ the protagonist in a surveillance capacity under deep cover for quite long periods of time and the author's skill is deployed in lengthy descriptions of small movements of both the watchers and the targets. This may seem a bit long-winded but with the author's deep understanding of such tactics it becomes very tense. The book moves swiftly on until the explosive ending.

Gerald Seymour has been a full-time writer since 1978. NO MORTAL THING is his thirty-second novel. I hope he writes many more and that I get the chance to read them all as I have never known him to write a dull one. I enjoyed this book tremendously and was thoroughly enthralled until the final page. This story was absolutely gripping and I urge you to read this novel.

A passionate review indeed! Though the story does simply not fascinate me. Thanks.

Gerald Seymour remains the master story teller. This book is a slow burn certainly , but therein is its quality. He has the confidence not to give a thrill on every page. Compelling in my opinion. Previous reviewer seemed to find subject uninteresting. Obviously his privilege, but I am surprised. I found it highly credible and also fascinating.. Michael Markham