Review: The Few by Nadia Dalbuono 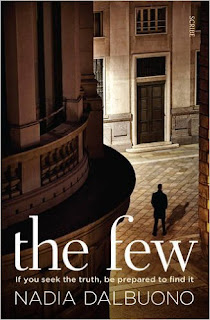 THE FEW is an interesting book. Based in Rome, it deals very much with the underlying corruption in the Italian political system and the power of the Mafia. The leading character, Scarmarcio isn't very sympathetic or likeable, and it is difficult not to draw comparisons and links with Montalbano either, but there is a vulnerability and complexity in him that I found appealing.

Scarmarcio was brought up in a powerful Mafia family but has turned his back on them to join the police force. Not all his colleagues believe in his change of heart and many distrust him. His superior hands him a politically sensitive case involving an important member of the government who is being blackmailed. An added complication is that the case is to be treated very sensitively and also very secretly. No-one but his boss and someone very senior knows or should know how the case is proceeding. Scarmarcio suspects that he has been selected to investigate because he is expendable. Meanwhile, on Elba, an American child disappears from the beach while her parents are sun-bathing nearby. The two cases draw closer and closer together and some very important people's reputations are put at risk.

There is a second voice in the book - identified as Pino - with a seemingly parallel narrative and eventually the links between the two strands are resolved satisfactorily. The character of the Prime Minister in the book seemed, to me, very much based on the ex-Italian Prime Minister, Berlusconi, albeit a gentler, more pleasant individual.

One weakness in the book was the references to Scarmarcio's back story. This was lightly touched on but not in enough detail to satisfy me as a reader. Although I enjoyed the book, and I expect the next book will set this out in more detail, I found it irritating and dissatisfying and I was left with many questions. The writing has none of the lightness of touch, and humour of the Montalbano books but I feel that fans of that series one will enjoy this one.

I must admit, I adored this one. The American is also great, although I thought this one slightly superior. And I thought Leone was rather sexy...!