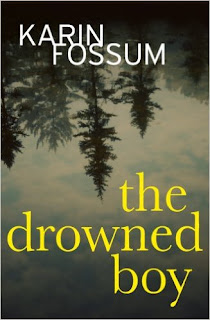 Book ten in Karin Fossum's Inspector Sejer series, THE CALLER, was published four years ago and though we've been treated to a new Fossum every year since, (books one and seven in the series plus a standalone), it's only now that we get to book eleven in the series and discover what ails our sympathetic and empathetic lead detective.

Before that however, Sejer's sidekick the younger and devout Skarre is called out to a drowning incident. The victim, Tommy, is a sixteen-month-old baby with Down's Syndrome. His mother, the very young and beautiful Carmen, says that she left Tommy alone for a few minutes in the house and when she came back he had wandered out, across the garden and into the pond opposite. She went in after him but all efforts to revive Tommy by her and her husband Nicolai and subsequently the emergency services failed.

Skarre feels there's something odd about the situation and calls Sejer and asks him to come out to the scene of the accident. There is no evidence of foul play, however the couple are interviewed separately and Carmen's story is a bit confused.

Sejer and Skarre must wait for the autopsy results to see if there is any reason to doubt Carmen's story.

Much of the subsequent book is given over to how the young couple are coping with the death of their only child. Carmen is strong and wants to start anew with a new baby and new baby furniture whereas Nicolai is heartbroken and sinks into a deep depression.

Like Sejer, the reader is itching to know what really happened to Tommy. Was it an accident or something more sinister? Carmen is not a very likeable person but would she really kill her own child?

Fossum's intelligent writing touches on all aspects of having a disabled child, and uses her atheist and believer pair of detectives to discuss religion and faith. This is a particularly sad entry in her series, infused with grief and to a lesser degree, Sejer's fear that he is seriously ill. This is not a book to enjoy in the traditional sense but there is much to admire and ponder on. I'm pleased to see that book twelve, HELL FIRE, is scheduled for June 2016.
Posted by Karen (Euro Crime) at 12:30 pm