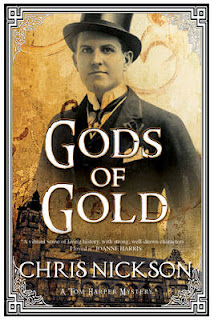 In what I'm sure will be a new series of stories from Chris Nickson, once again set in Leeds, the era is now the slightly more modern one of 1890, and the new hero of the story is Inspector Tom Harper. Tom is soon to be married to a strong female character called Annabelle; a woman who runs several businesses, including a pub, she makes a good foil to Tom.

As the story opens, Tom is pounding down Briggate, running after a criminal, but unfortunately loses him. He is then alerted to a case of a missing girl called Martha. Her mother Betty is in Armley Jail, and she should be still living with her father Col Parkinson. But she hasn’t been seen for a few days, and Col claims that Martha's been sent to his sister in Halifax. But is he telling the truth? Before Tom can start investigating further, all leave is cancelled due to the gas strike. Replacement workers are being brought in to make sure that the gas supply is able to continue. Of course this is an era when houses were lit by gas lamps, and industries depended on the supply of gas. As such the threat of an interruption to gas supply would have a big effect on the local economy, and the police are needed to keep order. But then Col is found dead, and it looks like suicide. Except that a few things look suspicious, and Col was seen with a couple of shady looking characters just before he was found dead. And Betty tells the police that he doesn’t have a sister in Halifax.

Tom is tasked with finding Martha, and Col's killers, and then the perpetrators of yet another murder that happens in the melee of the replacement workers, strikers and policemen. Gradually the two plot lines throw up some connections, and Tom is able to make some progress with his investigation, with a few twists and turns along the way.

The feel of the book is somewhat similar to Nickson's earlier books, with the back story of Tom and his relationship with his wife to be, and his professional relationship with his juniors, and with his senior commanding officer. And there is a bit of necessary negotiating to do with the leader of the local union, to help the plot along. It's interesting to see a more modern updated Leeds, with the little bits of local history thrown in. If you liked the original series of Chris Nickson books, you’ll like this one, even perhaps a little more.