Another Petrona Award entry arrived last week which just leaves 3 more to arrive. They have been ordered but there are delays at the moment.

Do take a look at the books published in April and let me know what you're looking forward to.

I finished the latest E C R Lorac from the British Library Crime Classic releases, Post After Post-Mortem. Though it was an enjoyable read, I wasn't wrong-footed after all in my predictions. I also found it rather sad. More often than not in the books I read, the murder victim is unpleasant, a wrong-un but this story involves the death of a much loved and young close family member who had done nothing wrong.

I also read the graphic novels, Heartstopper volumes 3 and 4 and the related novella, This Winter, all by Alice Oseman.

Back when I was reading The Christie Affair, I reserved from the library Jared Cade's Agatha Christie and the Eleven Missing Days. I managed to get the revised, 2011 edition. As it's been reserved by somebody else, I'm now trying to speed-read it! 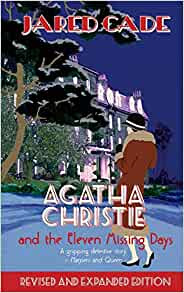 Here's the blurb from amazon:

In December 1926 Agatha Christie became front-page news when she vanished in bizarre circumstances from her home in Berkshire, England. The crime writer was found eleven days later in a hotel in Harrogate,Yorkshire, claiming to be the victim of amnesia. Up till now none of her biographers has come up with conclusive evidence as to what Agatha Christie did in the first twenty-four hours after she disappeared or whether her memory loss was genuine. Although the notoriety made Agatha Christie famous, she never recovered from the intense press scrutiny, and the private anguish that surrounded the episode ensured that she made no reference to it in her memoirs. Illustrated with many hitherto unpublished photographs, Jared Cade's riveting book on which a BBC television documentary has been based provides all the answers, including startling accounts by the novelist's surviving relatives, that reveal for the first time why she staged the disappearance with the help of a co-conspiritor and how it all went terribly wrong . . .

TV-wise, we are still watching Snow Angels which feels very true to life. I heard earlier today that series 3 of The Nordic Murders will be on 'Walter Presents' next month which is good news.

I recently caught up with series 2 of Departure which is a snappy six episodes featuring a (British)  accident investigator. We've had an air crash and a train crash and I believe it's a boat's turn next. I watched it via Sky but series one is available on Channel 5.

And finally I listened to the short series Death by Conspiracy about a Shrewsbury man, a Covid-denier who died of Covid, which is available via the BBC and other podcast providers. 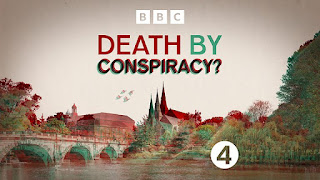