US Cozy Review: Death Crashes the Party by Vickie Fee 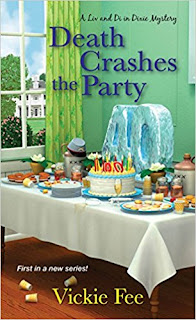 Death Crashes the Party is the first book in the Liv and Di series set in Dixie, Tennessee. Liv is a party planner, and her friend Di is a postal worker.

Liv is planing an anniversary party for a difficult client and when she goes into their garage to inspect the freezer she finds not one but two bodies! The bodies are brothers, one of whom worked for Liv's husband's haulage firm.

With the various police agencies putting pressure on her husband and her father-in-law regarding possible smuggling activities, Liv decides she need to help clear the family name.

What I particularly like about this new series is that Liv and Di actually do some real life investigating. They follows suspects and even break and enter to steal surveillance footage and a diary (in two separate instances). The story is well paced with plenty of activity in its sub 300 pages and the main characters are likeable. There are even a few party planning tips at the end of the book. I was possibly slightly predisposed to like this book as I'm slowly working my way through the engaging Hart of Dixie tv series but I think I would have liked it anyway! It reminded me of the cozies I used to read a few years ago where the main characters actually did detecting rather than waiting for information to come to them.

There are currently two available sequels, It's Your Party, Die If You Want To and One Fete in the Grave, which I very much look forward to reading.

I have been lucky enough to read the series and it is one of best new series.

Sounds very good thank you, love the cover too
Penney