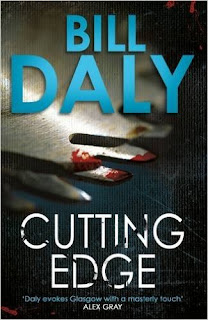 CUTTING EDGE is the third Glasgow DCI Charlie Anderson book by Bill Daly and it is really brilliantly gripping. Given the number of police procedurals that are published each year, it is very pleasantly surprising to discover an author who writes in a way that does not conform to a very predictable pattern. His protagonist DCI Charlie Anderson is a policeman of senior years and a veteran of many previous cases. This one opens on an ordinary day in June 2011 when a serial killer sends Charlie a parcel which contains the severed left hand of a victim who turns out to be an elderly gypsy. The parcel, contains a shoe box and in that, together with the severed hand, there is also a playing card. There are no identifying finger prints or DNA left on the parcel which was posted from a large post office in the usual way.

Soon a range of victims are being targeted including a heroin-addicted mercenary and a female accountant and their severed left hands are being removed and posted to Charlie and later the corpse of each victim is discovered. The media are involved and it soon becomes a high-profile case with much pressure from the top brass in the Glasgow police to relieve negative public opinion with a quick resolution. Soon Charlie's own family are being targeted and his wife and daughter have to go into hiding to safeguard them and there are tensions in the team of detectives hunting the deranged killer.

The book, since it contains many gory descriptions is not for the squeamish but I did not think it was unnecessarily violent but others of a more sensitive nature may be offended but I think it is important to emphasise the author is attempting to reproduce an accurate portrayal of daily life in a busy police station.

Could the killer be a recently released prisoner who was jailed as a result of Charlie's evidence? This and many other possible leads are investigated by Charlie and his team of detectives. The locality of Glasgow is well evoked with plenty of references to the Scottish diet and humour as well as street names.

I had the pleasure of reading for review purposes his previous books DOUBLE MORTICE and his debut DCI Charlie Anderson novel BLACK MAIL and his present book is well up to his usual high standard.

I truly loved reading CUTTING EDGE which was immensely enjoyable but at 320 pages I thought too short as I didn't want it to end. I will definitely look out for further books by this greatly talented British author who now lives and works in Montpelier France. Extremely well recommended.